How the pet loss industry has become worth billions

There are more than 455 million cats and dogs owned as pets worldwide, and as more companions enter into the lives of humans so do they, with time, exit. Pet loss is a growing segment in the death care industry and an opportunity and need that industry professionals should be working on providing for families.

Humans have had pets from the moment they were able to domesticate animals, however it has always been a luxury to be able to afford them. As general wealth across the world has increased, so has the accessibility and demand for pet companionship. Today ́s pets are completely humanized, meaning gone are the days of ownership. Pets are now important members of the family and pet parents want to treat them as such. This is important for the industry to understand and respect when dealing with the growing requests from families suffering from not just pet loss, but a loss of a family member.

In ancient Egypt priests would mummify and give proper burials to sacred animals. Today ́s pet parents have returned to the same ideology of honoring the memory of their sacred pets. Pet parents can expect to have the following options:

The pet loss segment has little regulation, which makes it difficult to get official numbers on. It also makes it difficult for pet owners to have a guarantee on the quality of the process. Despite government’s ́ lax regulations on pet death care management, associations have entered the scene to create codes of conduct, discuss legislation, provide training, connect pet loss specialists, and educate the public about dealing with pet loss. 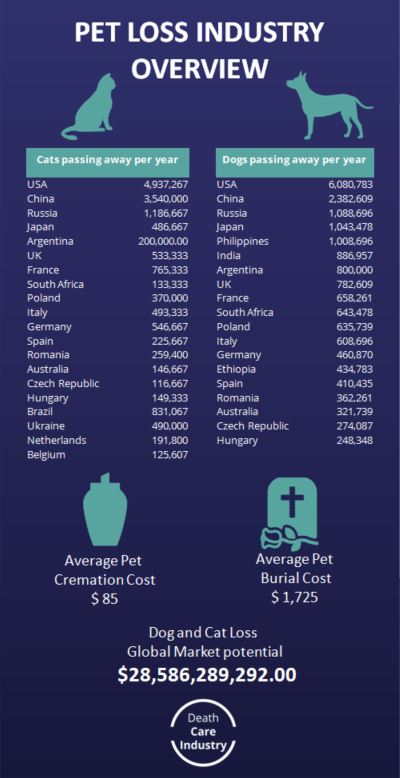 According to the US-based trade body Pet Loss Professionals Alliance (PLPA), the average annual turnover of its members around the world in 2013 was $860,464 (€771,409) and that year its members in the US alone cremated 1.46 million pets. Today that number has likely grown significantly, with 400 pet cemeteries in the USA today, and a growing number of pets entering into homes.

Based on the current pet population and average life spans of 11.5 years for dogs and 15 for cats, there are more than 34 million pet cats and dogs passing away globally every year. While cremation and burial pricing can vary drastically for pets based on country, city, animal size, the decomposition method, and any final owner requests we can roughly estimate a pet burial package is $1,725 (€1,556) and a cremation for cats and dogs is $85 (€77). Meaning that the pet loss industry has a yearly potential value of more than $28 billion (€25b).

These numbers also exclude animals that are put down from shelters. In the US there are 3,500 locations that unfortunately process 1.5 million pets that require equipment and maintenance to provide the most compassionate end of life process.

Pet loss is clearly an important growing segment the death care industry has to prepare for as it will continue to evolve, with pet parents wanting to lay their pets to rest with the same level of respect they pay the rest of the family.

Koreans are learning to live by pretending to die

November 7, 2019
Subscribe to the newsletter!
Latest on coronavirus
Death Care Industry
May 24, 2020