Latin America is emerging as a new hotspot for the coronavirus. To cope with the extreme numbers of deaths, São Paulo is building mausoleums with an estimated 13,000 burial plots.

With over 200,000 confirmed coronavirus cases and nearly 14,000 deaths Brazil is taking the lead as the most heavily affected country in Latin America. The increasing number of dead is also adding pressure to the Brazilian death care system, which has been caught off guard. The city of Manaus running out of coffins, serving as an omen of the terrible death care situations to come in Brazil.

To handle the surge of bodies and the lack of burial grounds Sao Paulo officials have decided to hire a local company to construct three new mausoleums. To facilitate the quick build the structure’s interior is reminiscent of a scaffolding grid, giving grieving families closure as quickly as possible. Heber Vila, the director of Evolution Technology Funeraria, is responsible for the building the new mausoleum and said the structure is made from safe recyclable materials. So locals do not need to fear ground contamination as the structure will prevent any bodily liquids or gasses from escaping. The three large mausoleums will accommodate final resting places for 13,000 deceased.

In large cities around the world the lack of funeral plots is increasingly becoming an issue. Forcing cities to become creative in their management of final resting space.The speed of the new mausoleum construction is unprecedented in Brazil and one of the solutions the country has been utilizing over the past few years. Brazil’s largest apartment complex size mausoleum, which is often called the vertical cemetery by locals is:  ‘Memorial Necropole Ecumenica’ located Santos. 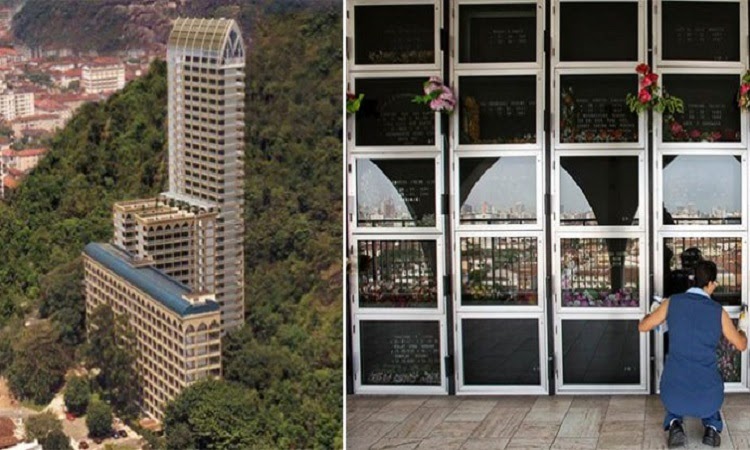