One state’s regulations is another state’s funeral home opportunity

As the coronavirus started to make its way across the United States it brought with it new regulations that have strangely differentiated in each state. Death care professionals are familiar with each state having its own policies and rules regarding licensing and so one, but as the pandemic hit, confusion quickly began. Creating new openings for those willing to use the differentiation in service due to corona as a marketing tactic.

When the white house officially advised that there should be no gatherings larger than 10 guests, not every state mandated it, so neither did all of the funeral homes.

As the epicenter of the coronavirus in the US, Washington state, was the first state to stop funerals, as they were seeing the devastation of the virus first hand. However, across the country, some states continued to offer services with a maximum of 50 guests, since the 10 guest max. wasn’t mandated by their state.

Creating a new competition between funeral homes regarding how many guests they should allow a family to have at ceremonies. Funeral homes, who wanted to air on the side of precaution and provide safety for their community and staff, were already in a bizarre position of not giving families everything they wanted. Now they were also in a position of losing business as competitors began to make them look unaccommodating since they weren’t limiting the numbers.

On the 22nd, New Jersey Department of Health Commissioner, Judith Persichilli mandated an executive directive that all funeral services must have a closed coffin.

Licensed mortuary practitioners, under the direction of a registered mortuary, shall not permit in-person viewings, visitations or ceremonies with an open casket containing the decedent, regardless of the decedent’s cause of death. Viewings, visitations or ceremonies with closed caskets or the presentation of the cremains of the decedent are permitted, but must comply with the current limitations on gatherings, as set forth in Executive Order No. 107 (2020) and New Jersey Office of Emergency Management Administrative Order No. 2020-04, and any subsequent Executive Order or Administrative Order relating to limitations on gatherings.

The state is reportedly now looking to amend this, after feedback from the death care community, but meanwhile homes across the state lines are already reaching out to families who are still interested in having an open casket. 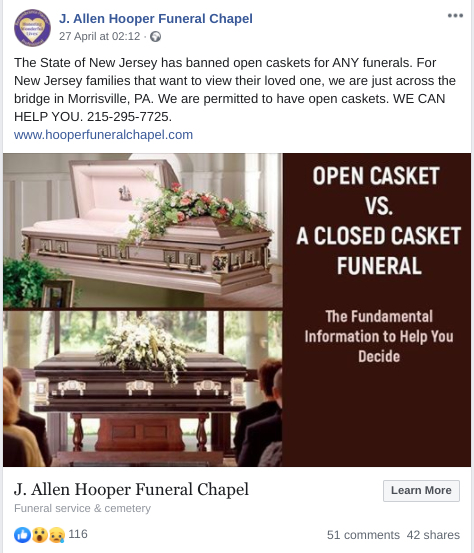 Competition in a pandemic

These are unprecedented times for the death care industry. A highly competitive environment with regularly changing regulations is creating a new dynamic for funeral homes. Busy taking care of the influx of coronavirus families, funeral homes still have to remain competitive and creative to retain revenue that has been generated from elaborate services and product offerings in the past.